Skip to main content
A Royal Tour of London

A Royal Tour of London 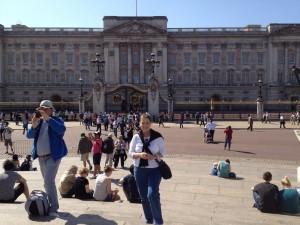 I’m a royalist: I love everything about the Queen. I watch all the royal weddings and any grand display of royal ceremony. I read the British papers and royal blogs. I like to cruise the royal website for job openings and pretend that I would gladly chuck it all for the chance to walk the royal corgis through the gardens at the palace for very little pay and a small room to hang my hat. So when my husband surprised me with a trip to London, I knew exactly what I wanted to see: as much royal as possible. We chose the Goring Hotel as our base in London – it’s where Kate stayed in the night before her wedding to William and just around the corner from Buckingham Palace. I began to plan out our days, purchasing tickets to all the royal sites on my must-see list. (Oddly, I had to pay to visit the Queen’s house, even though she is welcome to visit mine anytime for free.) 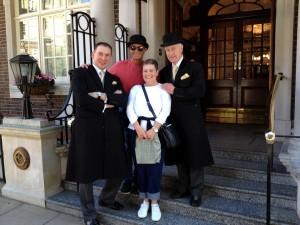 Arriving in London, we checked into our room and had lunch on the outdoor patio that Harry fell off of the evening of Will’s wedding. From there we set off on foot to see the palace. After all the years of seeing it on TV and in print, I was actually there in front of the gates, looking up at that famous balcony….years of royals waving flashed through my head! From the palace we started down the Mall past St. James Palace and Clarence House, under the Royal Horse Guards Arch and past the gates leading to 10 Downing Street. We turned a corner and there was Big Ben, glorious Parliament and my first view of the River Thames. We toured Kensington Palace where several of Diana’s most recognizable dresses on display. We saw the Tower of London, the Crown Jewels – Tiffany’s would be jealous – and London Bridge. Remarkable Westminster Abbey, the site of Diana’s funeral and William’s wedding, was so much more than I imagined; the aisle and alter are just a very small part of the abbey. Vast St. Paul’s Cathedral, where Charles and Diana were married, sits close to the street, with pigeons cozying up to office workers eating their lunch on the steps. I walked the aisles of both buildings, replaying in my mind the happy and sad events both churches have witnessed. 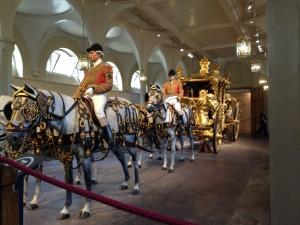 I put my hands in the rushing water of the Diana Memorial Fountain in Hyde Park and wandered the streets of Sloane Square. The Royal Mews, located behind Buckingham Palace, contains all the coaches used by the Royal Family, including the golden state coach the queen rode in for her coronation and the glass coach that carried Diana and her father to St. Paul’s. But the highlight of our trip was Buckingham Palace. Entering that building was so awe inspiring to me that I still can’t grasp that I actually was there. 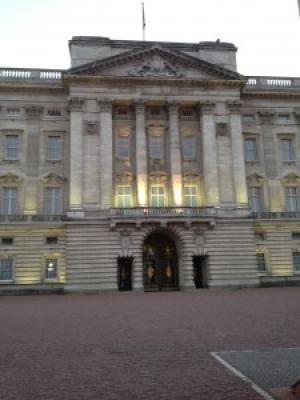 There are 19 amazing state rooms to tour, including the Throne Room where, yes, there actually are thrones; the Music Room, where both Charles and William were baptized; and the magnificent White Drawing Room, which is connected by a secret door to the Queen’s private apartments (the entrance is located behind a large mirror and chest to the left of a portrait of Queen Alexandra). Our trip to London is several months behind us now, but I revisit it each day in some way. I am still bewildered by the fact that I was actually there, did what I did and came home loving the city – and the Royal Family – even more than when I left.