The Adventures of Geocaching

A unique way to have new travel experiences; anytime, anywhere!

About two years ago, Pokémon Go emerged as a new phenomenon that kids (and many adults) became obsessed with. The popular augmented reality (AR) game allows users to search for, battle with and train virtual characters using a mobile device’s GPS features. On any given day, people could be found wandering in search of these characters in real-world locations. I remember bumping into players so absorbed in the app, they weren’t paying attention to anything happening in the world around them.

My children were no exception to the obsession. They would always ask me to take them to organized events where they could search for Pokémon characters. Many days, my phone battery would be drained from hours of game play. As I watched them play at these events, I couldn’t help but notice they were completely ignoring the beauty of the real-world as they immersed themselves in the app’s AR experience. Seeing this happen, I wanted to think of a way to move their attention from the mobile screen to all their surroundings had to offer.

Geocaching was something I heard of before but wrote off as a “nerdy” hobby. Nevertheless, I thought the game’s appeal and rules were close enough to Pokémon Go that it might actually spark my kids’ interest. At least it would give them the opportunity to search for tangible items and experience the great outdoors.

Geocaching is an outdoor, app-based activity that allows participants to navigate the world in search of containers called “geocaches” or “caches”. Using a mobile device to download the free app, players can immediately start searching for caches at locations marked by specific coordinates. When a cache is found, there is typically a logbook that players can sign indicating it was found. Some caches even have items inside that you can take and trade out for an equal or greater value tchotchke. As the rules go, if you take something, leave something. Otherwise, you just return the item and leave the cache as you originally found it.

After setting up the app, we discovered there were dozens of caches within a quarter mile radius of our home. Our first adventure took us to a small park about three blocks from our house. The park was tucked away in the middle of a residential block; we didn’t even know it was there.  Upon arriving to the park and reviewing the given coordinates, we found the cache; a small, magnetic box hidden under one of the benches. We added the kids’ geocache names to the logbook, giving them a sense of accomplishment in finding the box. Back in the app, they recorded their success in locating the item and left comments for others who would be searching for that cache in the future. 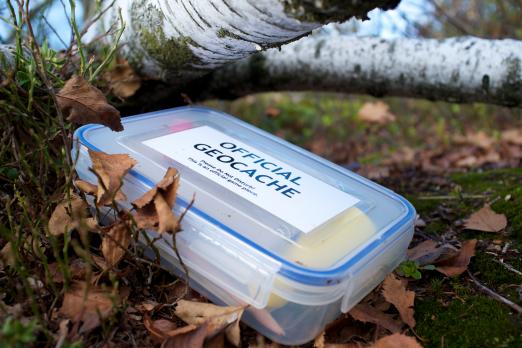 To my surprise (and relief), the kids fell in love with geocaching on our very first trip. Not only did it change my previous perception of the app, but it was actually really exciting to explore and find these hidden treasures. From then on, one of the kids’ most popular requests was to go geocaching around the city, and I was happy to oblige. Quest after quest, we were able to check off locations on the app’s map whenever we came upon a new discovery.

We never thought we would take our newfound love for geocaching on the road but as we traveled around different cities, it was a must to plan for at least one day of our trip to look for caches. It has been a great way to explore new cities and find off-the-beaten-path locations we would have never thought, or known, to visit.

Whether you’re traveling far or just within your city, I encourage you to give geocaching a try. With over 3 million caches in more than 190 countries, your next adventure could be waiting right outside your door.

Sebrina is the Account Executive for the “Windy City” of Chicago and specializes in creating customized packages and sharing the many benefits of advertising with Choose Chicago. When she's not busy being a mom and hanging out at basketball and fencing tournaments, she enjoys aerobic dancing and traveling to any place with warmer winters than Chicago.