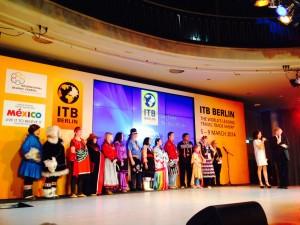 A friend of mine was sitting around a table with friends when a passerby stopped and asked: “Are you a real Indian?” He responded softly, “I am . . . we all are,” while motioning to each of his friends, no two who looked alike but all who were, indeed, very real Indians.

Working with AIANTA (American Indian Alaska Native Tourism Association) for the past five years, most recently at ITB in Berlin last week, I am still astonished at their diversity, not just in physical appearance, but in their customs, fashion, regalia, language, music, food and many other nuances of lifestyle.

This broad spectrum of differences was first exposed on a walk to the S-Bahn at the beginning of the trade show. It was a balmy 52-degree day in Berlin – way above normal temperature. While the Navajos from Arizona layered up for “the cold,” the Inupiat Eskimos, literally from the top of the world in Barrow, Alaska, commented on how it felt “summer-like.” 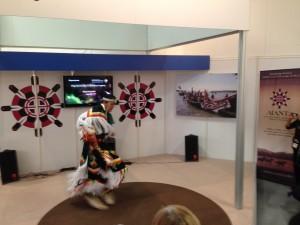 Visitors to the AIANTA booth – tour operators, media and consumers – would often gawk at the large map on the booth wall and comment how many tribes there are. Many thought there were only a few; all were surprised to see 566 federally recognized tribes across the states.

Just the eight participating tribes, many in full regalia, had most visitors shaking their heads, again, at the drastic differences. But then, they come from tropical islands, Arctic villages, deserts, high plateaus, the Great Plains and more.

This show was about tourism experiences, though, and that’s where perhaps the greatest differences were exposed. Travelers saw images and heard tales of Acoma Pueblo’s Sky City, a millennia-old village built atop an enchanting New Mexican mesa. They listened to Chickasaws tell about being forced from the U.S. South to Oklahoma, sharing what they left behind and, more importantly, what they found. The Navajos showed inviting pictures of their off-road vehicles going to off-limit places, sacred lands they now share with visitors.

The Oneidas actually represented all 13 tribes of Wisconsin and spoke of the “three-nation vacations” (Canada, USA, Native), while the Native Hawaiians used video of beaches, waterfalls, mountains and native sites to entice onlookers to consider flying half-way around the globe to their tropical paradise. One table away from Hawaii, Alaska beckoned with Tundra Tours, an Inupiat Eskimo program that reaches deep into an Eskimo village and explores its unique way of life on the edge of the Arctic Ocean.

As I put a wrap on this short piece, I see how it just scraped the surface of Indian Country diversity. Colorful pieces really could be written focusing on just native food, or music, or culture, or regalia, or . . . Alright, I think I've got the next few blog ideas set.