What counts as success for a destination web site ? How does my online marketing results compare to other leading destinations?  The question is the same whether you are in Chicago, Calgary, Christchurch or Canberra.

For many Destination Marketing Organizations (DMO) analytics is an increasingly important tool - but the absence of 'hard' industry KPIs or comparative data has made judging success, failure, or in between - difficult.  For the last several years Miles has been filling this gap by benchmarking destinations in  the US, Canada, New Zealand and Australia. In Canada we are working with local partners, Couple of Chicks and in New Zealand with the Regional Tourism Organisations of New Zealand national association. Benchmarking integrates increasingly powerful online analytics tools (eg: Google Analytics and Facebook Insight) with the ability to aggregate and average data - providing context, comparisons and commentary on each DMO's relative performance to its peers. 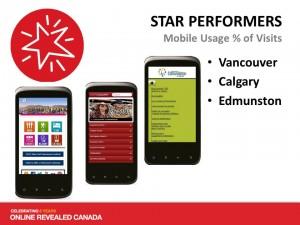 At the 2013 Online Revealed Conference in Canada, the Canadian Benchmarking program identified Star Performers - including Vancouver, Calgary and Edmunston in serving high levels of Mobile users.

Industry benchmarking is common in many leading industries (grocery, film, hotels and banking) - and is based on the principles of anonymous sharing where cooperation lifts the performance of everyone. Participants give access to their analytics including confidential information - which gets aggregated, averaged -  yet remains private.  Only each DMO sees their own results - reported back to them along with comparative performance data across a range of critical measurements. They can see their relative performance against all DMOs and DMOs of a similar visitor type or budget. Importantly, data can also be aggregated to plot trends, challenges and progress across the industry. For example the rapid growth of mobile use in travel has left many DMOs struggling to keep up. Benchmarking helps plot success for DMOs in serving users on mobile devices and helps identify 'Star Performers'. The benchmarking program in Canada and New Zealand includes not only web site performance but also social media comparative data - assessing the relative performance of Destinations from around the world across major social media channels. Miles has partnered with two leading specialists in this space to include a robust analysis of social media performance.  Miles first worked with Dave Serino - now with Think Social,  to integrate his reporting ("How Social is My DMO?") into the benchmarking program. Recently we have also partnered with SparkLoft - to offer a more in depth look at Facebook performance using their innovative 'SparkLoft Engagement' Rate'.

Benchmarking has proven vital to lifting the performance of New Zealand Destinations (Regional Tourism Organizations). Shortly to start its 3rd year, New Zealand RTOs have received bi annual reports on their relative performance - against DMOs of a similar size, all New Zealand DMOs and an international peer group of DMOs from the US, Canada and Australia. 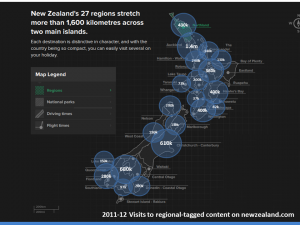 The benchmarking has driven results with a program of education and upskilling to address the challenges and opportunities identified by the reporting.  The results have been impressive. New Zealand Regions collectively have grown their online audience by more than 50% in the 2 years since the program started - and significantly improved performance in a range of critical metrics including mobile usage and social media engagement. Some areas remain a challenge - including campaign management, Chinese Online Marketing and Online Video. All three are major topics at a upcoming Digital Capabilities Conference for New Zealand DMOs being held in Lake Wanaka (near Queenstown) in late May.  Along with teams from Tourism New Zealand (including their China Online Marketing team from Shanghai) and Air New Zealand international speakers including Martin Stoll (CEO of SparkLoft) and Jeff Miller (CEO of Travel Portland). The conference will address the issues flagged by the benchmarking - providing case study examples, practical tips and resources to lift performance. Benchmark reporting both before and after the conference will plot progress for the New Zealand Regions - showing individual and overall performance in lifting performance across these industry objectives. For Destinations seeking to constantly evolve and improve, Destination Benchmarking programs are emerging as a critical tool in the marketing toolkit of the 21st century DMO.