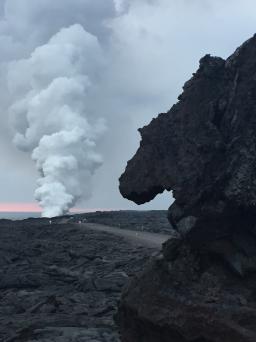 Kilauea volcano has been the main attraction on Hawaii Island (a.k.a. the Big Island) for the past 33 years, and has always fascinated me. Of course, it has been around for a couple hundred thousand years, but it didn’t really start getting media attention until the early 1980s.

I’ve visited it several times, but until last week I had never witnessed the lava actually pouring into the Pacific. We had been above it in a chopper on a no-flow day. We had hiked to the bottom of it on a trail that could be called the mouth of the Earth . . . two incredible vantage points for sure, but nothing like the show we saw on our recent visit.

To get to the point where Kilauea is adding acreage to planet Earth, you need to walk or bike four miles atop a crushed gravel road from the historic fishing village of Kalapana. Sadly, this is the town mostly destroyed by Pele’s wrath over the past three decades. All those images you may have seen of molten lava slowly enveloping homes and buildings were from here. 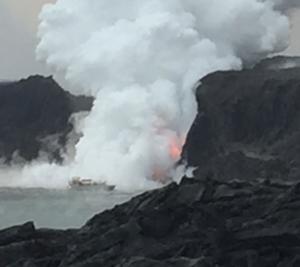 It’s a bit ironic in these days of coastal erosion and disappearing islands to find a spot where land is actually being created. We watched a large plume in the distance and eagerly pedaled toward its source. The National Park Service roped off a viewing area few hundred yards away, but that was close enough to see a torrent of molten orange lava leave the land for its new home in the sea. We were mesmerized watching waves crash on the rocky shore while steam roared into the sky and contents from the center of the Earth saw its first light.

A day before riding to the lava flow, another Big Island product of volcanic action beckoned: one of only four green sand beaches in the world. Papakolea Beach is a partially collapsed cinder cone full of olivine, a silicate mineral that, when of gem quality, is better known as peridot.

Denser than the ash fragments and other rocks drawn out of the cinder cone, the green accumulates on the beach and makes the three-mile hike a very worthy journey. Because it’s so rare and we had never seen that color on a beach before, it was even more magical dancing in the mid-day sun beside turquoise waters, black rock and white coral. 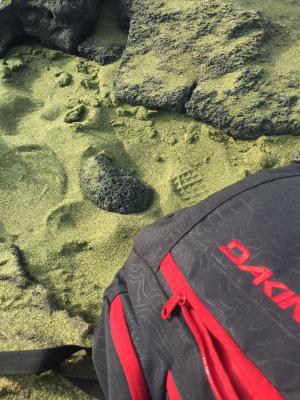 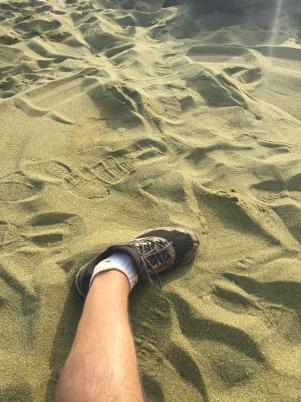