Miles recently completed its fifth Digital Marketing Conference for New Zealand destinations. The conference, held in beautiful Lake Wanaka in the Southern Alps of New Zealand, attracted more than 60 attendees from 21 of the 29 DMOs in the country.

It was the largest and most successful event to date, receiving overwhelming positive feedback, including this note from Sarah Meikle, GM of Marketing, Positively Wellington Tourism: “THANK YOU so much for the fantastic week last week. Honestly, it was by far and away the most outstanding of the Digital Symposiums and I have left with so many things to follow up on. Both Jeff and Martin were inspiring and I could have listened to their insights for hours.”

Jeff Miller, CEO of Travel Portland, and Martin Stoll, CEO of Sparkloft Media, (pictured below) were two of our international speakers, along with Miles’ own Karin Mast. Key online marketing staff from Tourism New Zealand and Air New Zealand was also heavily involved. 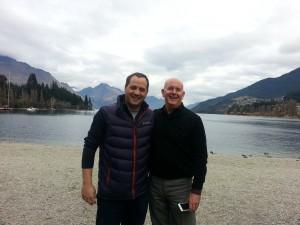 After another successful year we are well positioned for an expanded program in 2013-2014.