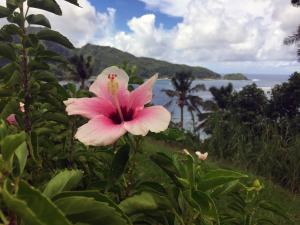 It’s the type of place where going out for lunch might mean grabbing a spear gun to go hunt for reef fish. A place where a walk to the beach may put you in a line behind a village chief, who clears the path with his machete. It’s home of the USA’s only south-of-the-equator national park, a tropical paradise where magical ocean blues and steamy jungle greens collide.

Most people know American Samoa is “somewhere down there” when pointing to its approximate location on a globe or map. But few can actually pinpoint this collection of seven Polynesian islands. It has been a part of the USA before Oklahoma, Arizona, New Mexico, Alaska and Hawaii became states. The territorial capital and main port of Pago Pago is fun to say and surprisingly easy to reach, just a five-hour flight from Honolulu. The independent country of Samoa is just 60 miles but 24 hours away, as the international date line runs right between the islands.

This is an island where “family first” became evident as soon as we left baggage claim. A rowdy crowd filled the waiting area with hand-painted banners, welcoming flowers and huge hugs. Relatives returning from Hawaii were received like celebrities. Minutes later, looking out the window of our hotel shuttle bus, an even more poignant statement about Samoan family bonds became evident: the highway was lined with homes where front yards doubled as graveyards . . .  to keep the family close.

This is an island where family-owned aiga buses buzz the roads like bees hustling to the hive. Hundreds of old pick-ups and trucks have been converted into colorful, sputtering discos on wheels. Every bus is distinct, by design, and they are mobile art as much as transportation. They run in all directions, sunrise to sunset, and you can flag ‘em down and toss a buck or two on the dashboard to pretty much go anywhere. 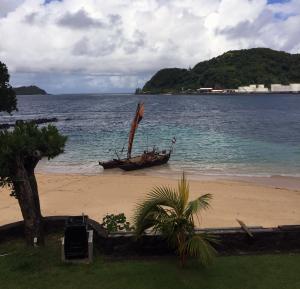 American Samoa is like Hawaii in the 1950s: a pure, natural destination ahead of all the development. It is an organic place, primed for gentle ecotourism growth. Presently, there are less than 200 hotel rooms and only one restaurant guaranteed to be open on Sunday. Only a handful of tour operators exist, but oh the places they will take you. We called South Pacific Water Sports and asked owners Mike and Paula McDonald if they would take us in a different direction on the island each of the next four days.

The first morning we aimed north, into Paka Fa’asao o Amerika Samoa where dolphins swam in the bay and flying foxes filled the sky. The latter, diurnal fruit bats -- with wingspans that can reach three feet –- are completely obsessed with mangos and other fruit and nearly oblivious of humans. They soar across the sky and roost in both trees and caves. Several trails led to bats-eye-views of the thick jungle terrain that rises precipitously above the turquoise waters of the coral reef. Beauty, beasts and only two other human visitors all day.

We traveled west the next day, following the path of the sun while paralleling a coastline that got more enchanting with every mile. The coral reef surrounding the island made for alluring tidal pools and varying hues of blue water. Small villages dotted the road, every one with a collection of beautiful churches fit for towns tens times their size. Family, faith and the type of living city folks fantasize about. Basketball court-sized islets with solo coconut trees, perfectly shaped waves, boundless shorelines of busted coral and white sand with not a single blanket, umbrella or bottle of sunscreen in sight. 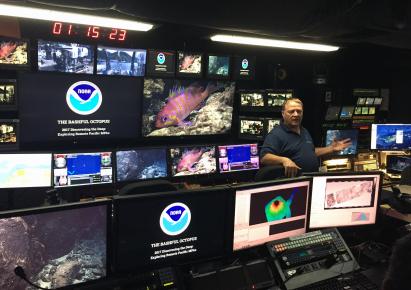 Our “go south day” changed to a” hang in the harbor day” when we learned a NOAA research ship was in port. We were invited to tour the ship from bridge to control center and learn details about its upcoming 23-day voyage of discovery. The Okeanos Explorer would be mapping the ocean’s floor and searching for the unknown with equipment that would produce high-def film and collect samples to depths of 20,000 feet. Our day’s education continued at Pago Pago’s renowned Ocean Center, a showcase visitor gallery for The National Marine Sanctuary of American Samoa. NOAA speakers and the center’s own images, displays and videos about the most diverse marine sanctuary in the country’s system, plus a water temperature of 86 degrees around the island, convinced us to get diving masks and snorkels and explore the reef. 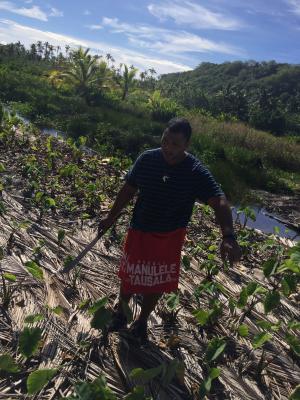 Our last day on the island meant time to head east. We hugged more raw and undeveloped coastline from Pago Pago to a small marina in the village of Au’asi. We boarded an eight-seat passenger ferry, greeted by a handsome, rugged Samoan in a lavalava who held out a hand that made mine completely disappear in his shake. Immediately I thought of the mark Samoan studs named Seau,

Tuiososopo, Polamalu and Tatupu made in the NFL. This was Chief Peter Taliva’a, who would lead us on a walk around the 374-acre island of Aunu’u.

Peter spent 12-years off-island in the army as a ranger and a paratrooper, but returned to Aunu’u to become a husband, father, chief and a strong proponent of teaching the young Samoan traditions. Through taro fields, beneath orange, mango, coconut and guava trees, atop shoreline cliffs and sandy shore, Peter offered us island history and insight on every plant and critter we saw or heard. His machete came in handy often, to clear trail, crack coconuts and cut poles to knock down high fruit.

American Samoa had the roads, trails and beaches less traveled we wanted. It offered us a slow-paced week of raw, pure nature in a new culture -- and without even leaving the USA. All we really wanted to find was one of those tree-fort like tiki-bars hidden in the rain forest, above a secret beach. One where the cold beer and fresh catch was always available. Oh, wait, I almost forgot to tell you about Tisa’s Barefoot Bar. 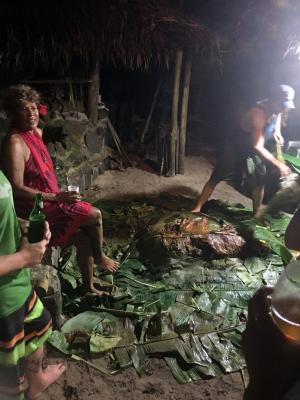