In June, the Google Trips app was announced among the most recent internments in the Google Cemetery. The free-standing travel app product that was available for both iOS and Android devices had lived a relatively short life (born 2016), but it had evolved quite a bit in three years, and even garnered some speculation that it could grow into an all-in-one super app thanks to its easy integration of reservation management, itinerary building tool, activity and dining recommendations, and more. But, alas, it wasn’t meant to be.

Thanks to our Google DMO Partnership Support Services program, we’ve spent a lot of time getting to know Trips. We learned quite a bit about it over the last couple years, which has also led to some speculation about might happen next now that’s passing into obsolescence.

Trips was certainly intended for lower-funnel audiences, and its content was exclusively focused on specific destinations. To really use it you had to know what city you were going to; or have a very short list of destinations you were considering. A user couldn’t start by considering a state or broadly exploring opportunities based on their interests. A museum lover in search of a new experience was out of luck if they tried finding inspiration within the Trips app, unless they wanted to play a metaphorical game of destination roulette (i.e. pick a place and see what happens). 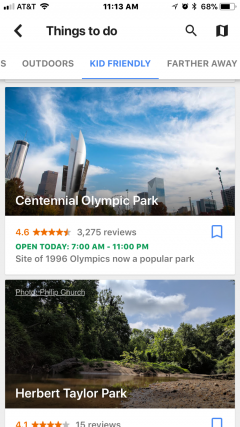 The content in Trips could be problematic at times. The format of discovery was largely focused on business listings inside of categories. So, a user could select kid-friendly activities and scroll through a set of image-centric business listings relevant to the theme. Most destinations only had two or three categories (Indoor, Outdoor, and Top Spots, for example), while larger cities tended to have more elaborate offerings that included neighborhood-specific recommendations, interest-based recommendations (live music, vintage shops, historic sites, etc.), or other topical buckets.

The problem was the style of the listings, which were heavily dependent on photography for their appeal to users. Much of the content was user-generated (Google’s Local Guides), and the AI wasn’t always making the best decisions (for several months it seemed to prefer images of clouds above attractions, cropping out the actual location it was seeking to highlight). Although this might’ve also been a result of an insufficient volume of images available for a location in some instances. We’ll never know now, so it’s probably best to look ahead rather than linger on the past.

Caveat: We don’t know what Google’s doing any more than any one else does, but that won’t stop a bit of speculation based on what we can see from the consumer side.

Google kills products all of the time. It’s killed off way more products than any of us actually use. Sometimes it kills things that people know about, and other times it kills things before they make it out of beta. But the death of Trips is notable because it had previously represented a significant slice of the company’s aspirations within the travel space. You could make the argument that it was the ONE product that was solely travel focused when it was introduced (search, Maps and other products have multiple audiences and functions outside of travel even though they are influential for travel consumers). But, it was also one of the few products that was exclusively an app rather than having meaningful accessibility via the web.

The blossoming opportunities in Google’s travel portfolio are almost entirely web-based and offer very clean experience design for mobile users. So, while Trips was mobile-only, it was a bit of an outsider, if we think about how it would align with Google’s Travel Guides, Hotel Finder and other recent introductions. 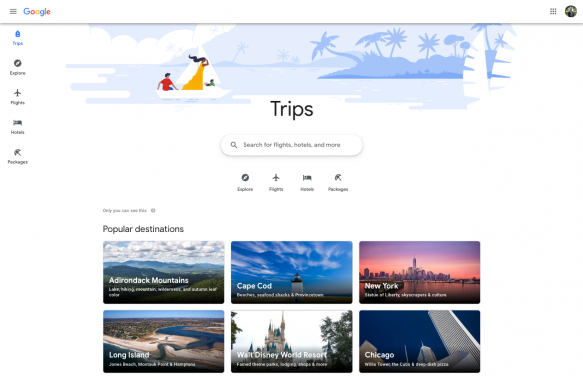 The new platform that will take on some of the features of the Trips app is Google’s new Travel section, which will provide users with popular suggestions and personalized recommendations, along with easy pathways into booking of packages, flights and accommodations. This will assume much of the lower-funnel functionality of Trips (it’s better if you know where you want to go), and push booking farther forward, which was something Trips never accomplished. The new /travel site is not a great inspiration tool, but it’s not designed to be, because those initial queries are often taking place in search, from word mouth, print, or other sources. Where this new platform may become particularly sticky is with travelers who are price-shopping a destination without a specific set of dates to get the best deal, and/or people looking for last-minute travel deals. Its interface makes that kind of planning behavior very easy.

Whether or not Trips survived, the major theme we’ve been watching for the past few months is the rapid evolution of booking integrations into various pieces of Google’s travel ecosystem.

In the last six months: We’ve seen the presence of Hotel Finder change significantly within accommodations-related searches (goodbye Local 3-Pack for hotels), and also start to incorporate vacation rental properties via third-party providers; we’ve seen expanded presence for Flights and Hotel Finder integrations in Google’s Travel Guides following a product redesign that made it more mobile-friendly; and we’re starting to see an expanded presence for attraction tickets on business listings in search and other places.

While Google once viewed itself as a portal for users to discover websites across the internet, the company is starting to seal off the exits and create streamlined pathways from individual products into sales conversion points. Booking was one thing that Trips never really pushed, and that may have been one of the deciding factors in its demise, because every other Google product influencing travel has gotten more overtly transactional since the end of last year. 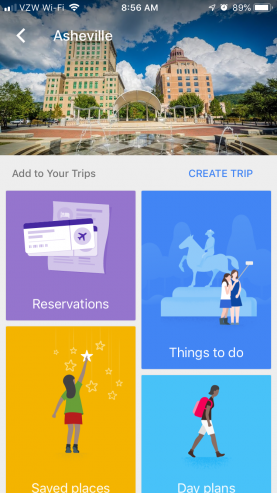 When the Trips app worked well it provided some interesting curation of local attractions and businesses based on the interests of particular users. It could provide a set of quirky vintage stores in Asheville, historic sites in the Richmond area, or collections of Western art in Denver.  But that type of recommendation set has migrated into the Maps app more recently, inside of the new Explore tab (this is in the app only, and not the web-based version). We’ve been watching some interesting developments inside of Maps where unique recommendations are starting to surface, whether you want dog-friendly restaurants in Phoenix, women-owned restaurants in San Francisco, or fountains in Kansas City. This is another big step for the content and functionality within Maps (have you tried category and “near me” searches in there yet?). Local businesses have a ton of opportunity for consumer visibility within Maps that they may not be aware of, and this is something we’ve seen repeatedly in Google My Business data for tourism businesses. 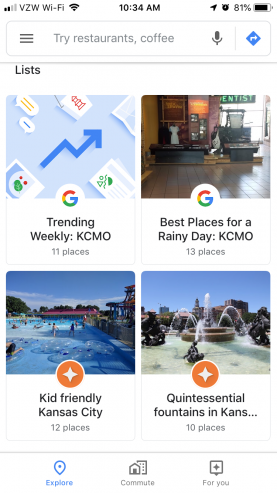 The other Maps feature that seems to have predicted the demise the Trips is the list-building functionality that is available for users inside of the app. Under “Saved Places” Google users can build lists based on whatever their interests are. Whether you want to build a list of your favorite local places to share with a friend, or use it as a trip-planning tool to save activities and restaurants in a new destination, the recently introduced functionality has a lot of potential opportunity for users. It’s not necessarily going to create you a linear itinerary by day, but there are plenty of travelers who would be glad to know they can quickly pull up a map highlighting the locations they’ve already saved to see what might be nearby, or to plan a route for the day based on their mood or the weather. In a bind, they’ll also be able to surface a list of recommendations directly from the Maps Explore tab as well.

Whether Maps is going to become a travel “super app” is a long conversation for another day, but from what we’ve seen, Google’s closure of the Trips app has more to do with a refinement of strategy within travel rather than any sort of shift away from the sector or the specific functionality within the app. The Trips app may be dead as of August 5, but much of the product has already been redistributed across others that will survive it. Its inheritance has been passed on the next of kin.