Strong year-over-year (YOY) organic search traffic growth is expected in an industry as content rich as destination marketing. However, with growing frequency we’ve heard destinations voice concerns that organic traffic to their sites has been flat, or even down, in recent months.

Of course, we’ve seen the typical lineup of culprits for such trends such as site update issues, mobile friendliness and aggressive paid search budgets; but just as often we’ve seen no noticeable change in rank or search volume to account for traffic flux.

In SEO, typically there are a number of small factors that add up to a big search traffic difference, rather than a single, clear issue. Such is likely the case behind this downward trend in organic traffic growth. While there were a number of major algorithm updates in 2015, we’ve been keeping an even closer eye on Google’s changes in search result formats in both travel planning and travel booking. Just Google “MarketName destinations” or “places to visit in MarketName” on your phone and you can see the extent to which the search giant is surfacing its own destination content before linking to DMO sites. In his recent post on the latest State of the American Traveler report, my colleague Chris Adams cited that more than half of travelers were either interested or very interested in using Google-curated content to research leisure destinations.

Being the curious folks we are here at Miles, we compiled the organic traffic of 26 destination websites nationwide from 2013 through the first half of 2016. While there was a healthy mix of ups and downs each year, the totals point to a trend that supports the anecdotal evidence we’ve heard to date. 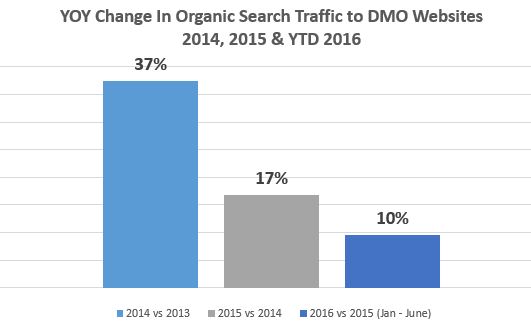 Looking more closely, it also appears that the decline became more apparent in the second half of 2015. In January - June 2015, organic traffic had improved 24% YOY, but in July - December, that growth slowed by half to only 12%. In the first half of 2016, traffic only improved 10%. We’ll be monitoring what happens the second half of this year. 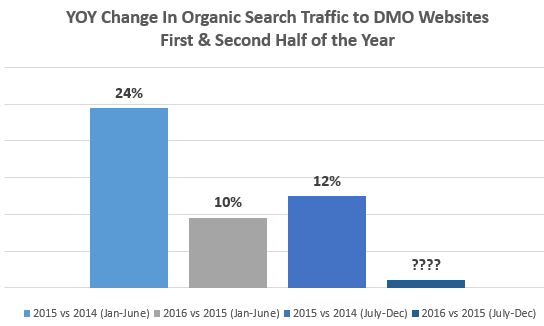 We hope that this analysis will open a broader industry dialog with Google about their impact on our industry and how a destination’s official travel organization can be more actively involved in Google’s travel content curation.

A Sarasota native, Kim came to Miles as a college intern in editorial in 1994 and stuck around to develop some of the company’s first destination websites in the late 90s. She is currently the Director of Online Marketing for our Hospitality division, where she develops and implements the online media, SEO and content marketing strategies for our resort clients.