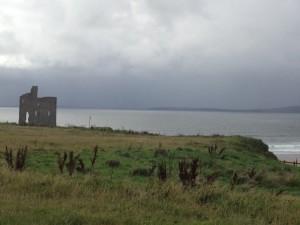 We landed at Shannon Airport in Ireland on our way to the seaside town of Ballybunion, located on the west coast of County Kerry, overlooking the Atlantic Ocean. We chose this charming area because we wanted to experience a small town, and this one just happened to be home to a world-famous links course at the Ballybunion Golf Course. Since my husband Mark is a golfer, to come this far and not play would have been one of the seven major sins of golf. There is a statue of Bill Clinton playing golf, located on the corner of the main street that was erected to commemorate his golfing visit in 1998. President Clinton considers Ballybunion to be his favorite course.

For some reason we decided that we would experience more of Ireland if we drove. Our route from the airport was along the Atlantic and the scenery was remarkable… at least what I could see when my hands weren’t covering my eyes. Getting out of the car in Ballybunion, it became clear to me why the Irish drink: to forget the trauma of driving on roads way too narrow for two cars with stone walls just inches way. All this is done from the wrong side of the road and at breakneck speed in the rain while refusing to give an inch to the driver coming the other way.

Oh, and then there are the round-a-bouts. For some reason the signs we were looking for always seemed to come right after the turn off (it never dawned on us to go around again, we just constantly got off at the wrong exit and tried to find our way back). 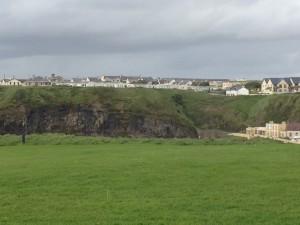 But the town itself was perfect, with a main street that led to high cliffs and castle ruins hugging the wild Atlantic. Pubs and small shops lined the street along with a few small gambling establishments mixed in. The best part? We could walk to where we needed to go.

We met an older gentleman near the Bill Clinton statue and asked him if he had lived his whole life in Ballybunion, to which he proudly replied that he had. We guessed his age to be around 80; he was the picture of what you might expect an Irishman by birth to look like. 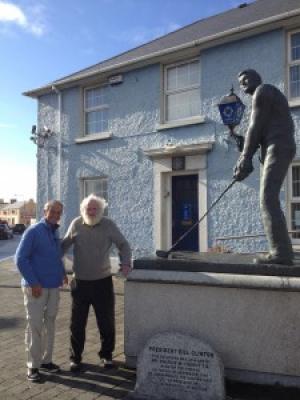 He had wild white hair and a full beard with a weatherworn complexion punctuated by mischievous blue eyes under bushy white eyebrows. His hands were large and rough as he extended them warmly to us in greeting. He was wrapped in a comfortably worn sweater and looked like someone who had lived a bit of a hard life but was smiling and friendly nonetheless. After a few minutes of conversation we were surprised to find out he was only 64. During our stay we crossed his path in a few of the cozy pubs and were happy to repay his friendliness with a pint here and there.

On our third day there, my husband finally experienced the thrill of playing the Old Course at Ballybunion – and in typical Irish weather. It rained, the wind blew constantly, the sun peaked through and then it rained again. And because the course is a walking course only, he experienced it all for several hours. 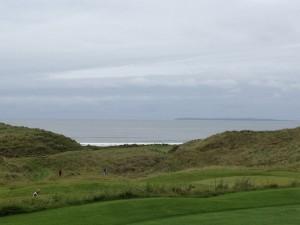 The course is rugged with high grassy dunes and rolling hills, with a much more natural look than manicured American courses – making it all the more beautiful and not for the faint of heart. But Mark was like a little kid under several layers of clothing covered by rain gear, just blissfully happy to have had the opportunity to play.

Despite the Irish weather, or maybe because of it, Ireland is magical. The wind and rain seem to envelop you in a dampness that blurs time and softens the world around you. It slows your pace, quickens your smile and for just a bit, no matter where you come from, makes you Irish to the core.