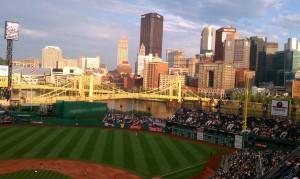 I love that my roots are deep in southwestern Pennsylvania. I grew up in the Pittsburgh area and, yes, I do bleed black and gold—painfully sometimes. I love landing in the Burgh, flying over a lifetime of familiar sights before wheels down. On my last visit in May, the trees were just beginning to bud and the hills were turning green; spring had arrived after an especially long and cold winter. Tulips and daffodils brightened the yards and the sound of lawn mowers had replaced the roar of snow blowers for the next several months. For some reason the grass smells sweeter at home.

Driving in from the airport, the Fort Pitt Tunnels seem to spit you out and offer you a first glimpse of this area where the three rivers meet. To the left are PNC Park and Heinz Field, hugging the north shore of the Allegheny River. The fountain at the Point spouts water from a subterranean river about 54 feet below the surface (and not from any of the famous three rivers that form this area known as the Golden Triangle). It is the largest fountain in the U.S. and a welcoming site to anyone coming into the Steel City.

Heading east along the Mon River brings me to my family and a weekend of cherished chaos: little league games, a riding lesson, dance class, a Confirmation, the Kentucky Derby, Pirate baseball and Penguin playoff hockey. And there is food… lots and lots of food—an important part of any Italian family gathering!

Attending a Pirate game is always a must, no matter how tight the schedule. PNC is a glorious ballpark, surrounded by small bars and restaurants dedicated to the history of local sports. The Pittsburgh skyline backdrops the outfield, but somehow the park feels like it’s tucked away in suburbia instead of across the river from the city. Getting to the park can be an adventure in itself; you can ride the bus, take the Gateway Clipper shuttle boat, book a water limo or walk over the Clemente Bridge. Once inside the park the smells of the Burgh hit you full force: Primanti Brothers sandwiches piled high with meat, cheese, coleslaw and French fries along with pierogies, kielbasa and pizza from local shops. You can wash it all down with a Penn Allegheny Pale Ale, Penn Pilsner or Iron City beer. I don’t go expecting a Bucco win, I pray for one and I am thrilled when it happens.

Like so many cites, Pittsburgh has changed, but has somehow stayed the same too. The steel mills that used to paint the summer skies orange are gone; the Pittsburgh Press, Kaufmann’s and Horne’s department stores and streetcars have also disappeared. But that unique language spoken by the locals is alive and well, along with Kennywood Park, the legacy of Mr. Rogers, the inclines and that amazing view from Mount Washington. I know I’m partial, but no matter where I have traveled or where I have lived, I love my hometown.