On the second Tuesday of each month, we bring you new and interesting technology-related tidbits. While many will be related to tools that can be used in destination marketing, some are just for your inner geek.
Today's post features a more enjoyable way to verify humans are subscribing to your email marketing programs, some interesting information on gaining visitors through second-screen experiences, and a high-tech toy to make your inner geek visible to all.

Yes, I heard you groan. No, I won’t apologize. You’re probably familiar with the CAPTCHA system in its many forms. If you’re like me, with less than 20/20 vision, sometimes those words and phrases look like Swahili. And I’m not fluent in Swahili. Enter PlayThru–  a “gamified” CAPTCHA tool. Rather than struggling to read the swirling letters and numbers (toencizes is not even a real word!), PlayThru aims to make it easy and fun to verify you’re a carbon-based life form. Make pancakes, park a car or catch some butterflies; save the eyestrain for another task.

What started as a simple, but very unique, sound identification service has turned into a platform for “second-screen” experiences. The first time I saw Shazam’s icon on an Old Navy commercial, I scoffed. With remixes of classics like Sister Christian and lyrics like “Let’s talk about jeans, baby, for the whole fam-i-ly” (Really, Old Navy, really??), this seemed like an annoying, yet hopefully passing, fad. Turns out, however, this fad could be a boon to your brand. According to Mashable, 85% of Shazam's 200 million app users use the platform through television. Imagine a commercial, starring a destination, and featuring known and noteworthy tunes or added-value web content. Shazam could do for you what QR codes are not. 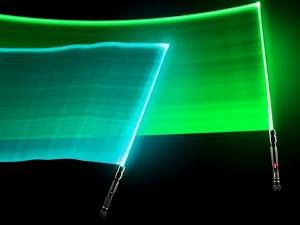 Have a spare (WickedLasers S3) laser lying around? If so, you too can be a Sith! WickedLasers has come out with a magnetic gravity-powered plug attachment that lets you create your own lightsaber. It even powers up and down like a real wish-it-were-real Jedi sword. It won’t be real enough to, say, cut off your estranged son’s hand (SPOILERS!) but you can certainly become the most famous nerd on the block. Be careful, though – the future’s so bright you gotta wear LaserShades to operate, but even those look cool. Check out the LaserSaber in action here.

Do you say GIF like “jif” or with a hard G? Brush up on your nerdcabulary and learn the correct pronunciation* of some well-known web words courtesy of Slacktory. (*no, they're not)