New Google Format for Destinations: What DMOs Need to Know

Yesterday a colleague at Miles brought to our attention a new Search Engine Results Page (SERP) format in Google that could have an impact on DMOs – particularly states.

Yesterday a colleague at Miles brought to our attention a new Search Engine Results Page (SERP) format in Google that could have an impact on DMOs – particularly states.

Google regularly tests new SERP formats in limited releases in a specific vertical or geographic markets. Typically, only time tells us whether a new format is the beginning of a full roll out or a test that may never be fully adopted.

Most recently in the travel vertical, Google eliminated Carousel in the SERPs for hospitality businesses such as hotels and restaurants and replaced it with a “Local 3 Pack” of business listings. Currently, searches for “things to do” in a state will bring up a “Points of Interest” Carousel (below) that contains a mix of both attractions and destinations – though mostly attractions. The Knowledge Graph for the state (to the right of the organic results) also features “Destinations” in the state. 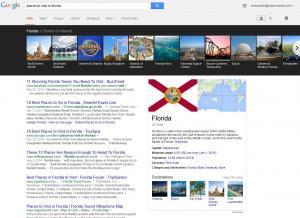 We have spied a new “Carousel” format when doing a search for “state name + destinations.”

State DMOs should take note. While top billing and photos were features of the old Carousel, the new Destination Scroll takes up more page real estate at the top and is harder to ignore than the black bar of Carousel. Add to that the enticing tag lines, and the new SERP makes it more appealing to click a particular destination than to click on the state DMO website that is likely in the regular search results. Depending on whether this format rolls out more broadly, this distraction could impact that amount of organic traffic the state sees from searches that return this format.

In mobile search, the impact is even more dramatic. On all but the newest large-screen phones, only the Destination Scroll shows in the SERP. On larger phones, the first organic result can be seen.

If you work for a city/regional DMO, you certainly want to know the ins and outs of how your market is featured in the Destination Scroll. Unfortunately, the “whys” surrounding Google are always an educated guess. Overall, it appears that the DMO will be able to do little to influence these results in the Scroll itself.

The most obvious conclusion seems that the results are influenced by Google’s search volume data, as the order feels based on market popularity. For example, in Florida the top four results are Orlando, Miami, Key West and Fort Lauderdale. But Google’s own Google Trends data on search interest by topic (in beta) on these markets would reorder them to Miami, Orlando, Fort Lauderdale and Key West.

The listing photo is always the same photo featured in the destination’s Knowledge Graph, and Google grabs these from all over the web – Wikipedia, Trulia, TripAdvisor, DMO sites and a KIA dealership were all sources seen for the “lead” destination photo.

The five keywords used to describe the market seem more semantic than driven by keyword search volume – otherwise every market would feature “resorts” and other popular travel terms. Most feel pretty accurate and stay positive. With the exception of a few references to alligators, bears and sharks, we didn’t find much cringe-worthy.

So what can you control? What will be important to the DMO is your site’s rank for the keyword triggered by clicking on your destinations link in the Destination Scroll. An interesting nuance (to a geek like me) of this new format is that the keyword triggered is not consistent for each market (as it is for hotels) and seems to default to whatever is the most popular search term for that market.

For example “Kissimmee FL,” “Orlando Florida” and “Miami Beach” are the terms for their respective markets – FL, Florida or nothing – make up your mind Google! However, “Kissimmee FL” has a higher search volume than “Kissimmee Florida,” “Orlando Florida” is higher than “Orlando FL” and apparently no one bothers to type “Florida” when searching for Miami Beach. So to maximize your visibility, identify what keyword is being used for your market and track/optimize your ranking for that keyword.

We will be keeping a close eye on the next developments with this format and sharing them with you here!
Share This:

A Sarasota native, Kim came to Miles as a college intern in editorial in 1994 and stuck around to develop some of the company’s first destination websites in the late 90s. She is currently the Director of Online Marketing for our Hospitality division, where she develops and implements the online media, SEO and content marketing strategies for our resort clients.