Skip to main content
Paper Maps Instead of Apps

Paper Maps Instead of Apps

It’s easy to let the smartphone tell us where to go, what to eat, where to stay. That’s why I love shutting it OFF.

Saturday morning we woke in Montgomery, Alabama, and had until Sunday night to reach Oklahoma City. Like my coworkers in destination marketing, I’m familiar with all the ways mobile phones offer us insight on attractions and how to find the action, but we’re both slaves to that phone 50+ hours a week. Over eggs, grits and toast heavily burdened with real butter, we laughed while listening to locals tell us why Selma would be better than Tuscaloosa; Muscle Shoals more interesting than Mobile. We digested the food and the possibilities, than unfolded a well-frayed map. Cousin Dave and I agreed word-of-mouth and whim would rule the route while the phones rested in the glove box.

Forty-nine years ago the world watched civil rights marchers and state troopers collide on the Edmund Pettus Bridge in Selma (pictured above). We felt compelled to begin our day there, and from there, free from Yelp and Urban Spoon offering us restaurant suggestions, unbridled of Siri and her suggestions, we just let our eyes, ears and intriguing place names on the map guide us.

Over the next few hours we turned down roads for no reason other than their unusual names. We sat under a tent at a revival and gawked at gospel singers while also learning a lot about Selma from folks who actually wrote the history books. There’s no better way to find great restaurants and bars than to simply go where all the cars are.

Of course, we might miss that yuppie post about stale bread or that foodie rant over an IPA being too hoppy, but such are the risks when the phone stays in the box. That philosophy led us to a packed pub for some grub after crossing the state line into Meridian, Mississippi. We met the owner of the establishment, who wore a Mississippi Blues Trail tee and directed us to what he claimed was the best place to hear Delta Blues in the state. It was more than 200 miles to the crossroads where Robert Johnson sold his soul to the devil and the Delta Blues were born . . . but on this day, whim and word-of-mouth were king and queen.

On arrival in the dark, Clarksdale looked like so many other best-days-are-behind towns, with shuttered warehouses and buildings, deserted streets and don’t-want-to-go-that-way roads. Then we arrived at Ground Zero, a joint venture with the town’s mayor and actor Morgan Freeman that allowed Delta Blues to thrive where they were born. 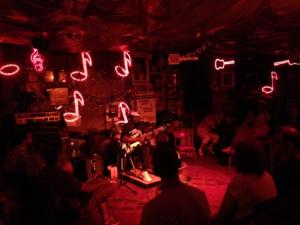 Like a well-worn roadhouse, the outside porch was littered with old couches and rocking chairs packed with smokers. Brass and vocals leaked through the walls all the way to the streets. The music pulled us in for a few pints before a set break and a chance to check-in a room directly over the stage. No wonder it was available four hours earlier: but we didn't plan to sleep until the music stopped. And we had another club to visit.

It stood a short hike away, across a few sets of abandoned rail tracks, past a couple of those shuttered buildings. “There’s no address, just follow the sounds of Terry Bean’s harmonica and guitar that way and you’ll find Red’s,” one of the sofa-top smokers told us in her gravelly midnight voice. Sold on the plan, we ventured into what felt like a double-wide, packed to the gills with boxes, bags and humanity, throwing us back 60 years and keeping us in a groove until Ground Zero beckoned again.

Somewhere after the last guitar groaned, before the sun rose, we pulled out the Mississippi, Arkansas and Oklahoma maps, and pondered the possibilities for the next day once, which would once again led by paper maps and no apps.