I’m pathetic. In April, I set out to see all 50 states in 60 days. And now, 13 days longer than planned, I’m done and . . . I missed West Virginia. I know, it sounds like a punch line will follow, but this is no joke, nearly twenty years in this industry and I’m a pitiful traveler. 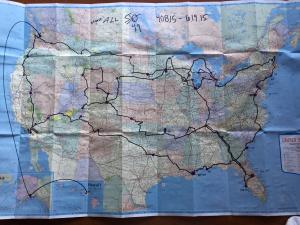 Take, for example, what happened on the ride between Denver and Oklahoma City. I watched the Weather Channel before leaving Colorado and stayed tuned in on the radio. The severe weather was all over Oklahoma and Texas, so I decided to stay just north of trouble and found a place in Dodge City, Kansas, for the night. I’d scoot to OKC when it was safe to travel in the morning. And yes, I know, I saw that movie about the girl on a bike with a dog in her basket, the one where a house landed on the witch . . . but Kansas was in the safe zone that night. Until it wasn’t. 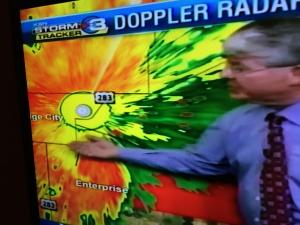 The digital clock in my Best Western room read 1:33 a.m. when the front desk clerk called and blurted, “Get to the tornado shelter now.” Before I could ask, “What tornado shelter?” Someone banged on my door and yelled, “Get downstairs now!” In less than a minute I was standing with two-dozen of my newest best friends, all of us in our finest 1:34 a.m. outfits, all staring at the telly, watching the local station’s Doppler radar graphic. We were the bulls eye.

The walls shook, the thunder exploded; there were several tornados that touched ground nearby but, in the end, we got cookies and the “okay” to get back to bed.

Less than a week before this, on a lonely Wyoming highway just north of the Utah state line, I chose exactly where I shouldn’t have been when a truck driving toward me hit a bump and lost a little of its load, sending one rock eye level at my windshield. I did have 18,091 miles on this trip where nothing hit me, but this imperfect timing cost me a new windshield, a half-day’s travel . . . and probably a few more hairs. 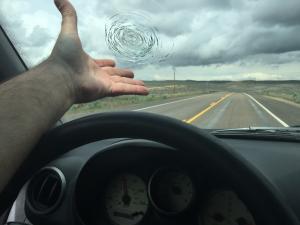 Then there was N’Awlins a few weeks before that. My wife always wanted to go to Jazz Fest for her birthday. Sure enough, six dates to choose and I pick the wettest, stormiest one of them all. It dumped so hard we got out of a taxi and barely made it thirty feet into a bar. A few drinks and a few hours later, we sloshed our way into the venue—a racetrack that now smelled like wet hay and horse dung—where every muck-filled step threatened to snag one of our shoes. Yes, the music was great, the food even better . . . but this pathetic tourist needs better timing. 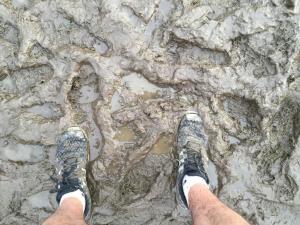 I’ve also become pretty lame at leaving things behind in hotels: three dress shirts in a Milwaukee closet, Maui Jim sunglasses in a Ludington, Michigan, cottage, phone and Mac chargers in several different locations and, well, lets just say I stop at outlet stores to buy socks and undies a lot because I seem to have fewer at each Laundromat stop. But then, if I do the math, each night I take out a dozen clothing items, at least 10 things from my shaving kit, open my briefcase . . . maybe 40 things total every night. Forty things times 73 nights is 2,920 things, and I only left behind 25 or so . . . I need to look at this differently: that means I’m remembering 99% of the things I bring.

Maybe I’m not so pitiful after all.