“Touchdown - Camerun Peoples!” That’s a common phrase Appalachian State fans have heard over the years thanks to the electrifying play of one of the best running backs in college football, Camerun Peoples.

But what does a college football athlete have to do with destination marketing? Not much if you had asked a year ago. But thanks to new name, image, likeness (NIL) laws set by the NCAA, Miles was able to help Explore Boone become one of the first destination marketing organizations to partner with a NCAA athlete.

It all started when the NCAA updated their NIL laws in June of 2021. The groundbreaking change had an immediate impact on collegiate athletes looking to diversity their talents and strengthen their brand.

As luck would have it, Explore Boone didn’t have to look very far to find their next brand ambassador because for the last three years, Camerun Peoples had become a household name among Appalachian State fans across the country.

The relationship began as a collaborative effort between Miles Partnership, Explore Boone and The Sports & Entertainment Group, who represents Camerun Peoples on NIL-related matters. “We saw an opportunity to take advantage of the recent changes to NIL laws to establish a unique partnership between a destination marketing organization and a college athlete that is, to my knowledge, a first within the travel and tourism industry,” said Senior Vice President at Miles Partnership, Ryan Thompson.

"Working closely with Explore Boone and The Sports & Entertainment Group team, we identified a top athlete that has strong ties to the local community and reflects the destination’s brand values, and we are excited to collaborate with Camerun to create authentic content that will increase awareness of Boone and drive increased economic impact.” 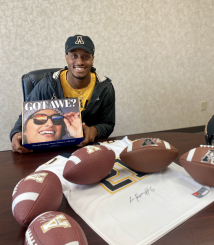 Not all partnerships are created equal. In fact, the collaboration between Explore Boone and Camerun Peoples was built on crafting an authentic message that would complement the new “Inspiring Awe” campaign that launched in September. Explore Boone’s digital reach will be amplified through the built-in fan base Camerun’s gathered over the years. The added exposure will allow Explore Boone to tap into an audience that includes current students and Appalachian State alumni who travel to Boone regularly to see their Mountaineers in action. We understand today’s fans are tomorrow’s visitors which is why we believe this partnership will have a positive impact in Boone for years to come.

Beyond the football field, followers of Camerun and Explore Boone will begin to see a regular stream of curated content that will inspire fans to experience things in Boone they’ve never done before. This includes dedicated Instagram posts that will be strategically promoted throughout the remainder of the college football season to enhance Explore Boone’s reach and expose them to new audiences in North Carolina and beyond. Other deliverables will include long form content that will be published on Explore Boone’s website and a series of social-first videos that will give users a behind-the-scenes look at some of Camerun’s favorite places in Boone.

And while Camerun has already put himself in the record books at Appalachian State, you never know – what started as a fun partnership between Explore Boone and a star athlete may very well set a precedent on how to work with future playmakers in the NFL.

Be sure to follow Camerun and Explore Boone to keep up with what they're doing next.