It was too soon to leave Memphis. We didn’t have our fill of Delta Blues and blackened catfish yet. But it was time to draw a card, roll the dice and go somewhere. Somewhere the suit of the cards and the dots on the dice would lead us. Chance would dictate our route for the next 48 hours.

Our game was simple. Draw a heart and we drive north, a diamond south, a club west and a spade east. The dice tell us how many miles to go and doubles would give us the option to double the miles. So a queen of hearts plus a pair of fours meant north, either 44 or 88 miles. We’d give ourselves one misdeal a day if we didn’t like the direction. Otherwise it was shake, shuffle, roll and go find something interesting.

We discussed the previous night in Memphis over shrimp and grits, and a few refills of the house coffee. Beale Street never disappoints with its bars stacked with bourbon and its stages vibrating with the sounds of blues, rock or soul. Songs by and images of Elvis, BB King, Johnny Cash, Otis Redding and so many others were everywhere. Their ghosts were close.

Memphis is an ideal starting point for random travel like this, as the first Shake, Shuffle and Roll could lead us to any of seven different states. There were so many possibilities for the days ahead: the Grand Ole Opry in Nashville, Elvis’ birthplace in Tupelo, maybe even the Kentucky Derby. My wife, Jolica, would be the shotgun warrior for the trip and start our fate with the first draw. She pulled a six of diamonds. And the first roll: a three and a six. That meant south, 36 or 63 miles. We looked at the map to discuss.

Not Yo Mama’s 5K Race

Senatobia, Mississippi, called first. Just 36 miles south of Memphis, the land early settlers bought from the Chickasaw Indians for $1.25 an acre means “rest for the weary.” Loafing around downtown looking for something of interest, a window sign caught my eye: Senatobia’s annual classic car show, corn hole tournament and Not Yo Mama’s 5K Race was in two days! We would miss all of that but a local told us we were right on time for Alma Jean’s southern comfort food. Next thing you know we’re sitting at a table loaded with collard greens, sweet carrots, gravy stuffing, fried chicken and lively conversation.

One Degree of Separation

It’s a strange feeling to look at a map and see something pulling in every direction except the direction you need to go. But that’s what a spade and a pair of fives will do. We aimed east past family farms and just-a-dot-on-a-map towns when a funky coffee cup mural on the wall of antique store caught our attention. So did a sharply dressed woman sipping a latte on a sofa inside the shop. Sure enough, she was the marketing director for the town of Holly Springs and soon enough we discovered we had a number of mutual friends with Miss Tyrisha Battle.

Tishomingo. Iuka. Tuscumbia. A series of towns named after Cherokee and Chickasaw chiefs brought us to a place where the most famous disabled person in the world was born and raised. She was deaf, and blind, yet graduated with Bachelor of Arts and became an author, activist and renowned lecturer. Our timing only allowed us to visit the outside of Helen Keller’s homestead and museum, but some nearby signs helped us learn a lot about this amazing lady.

Our game allowed us to find a hotel within five miles of our last roll. We did have pillows and blankets in the car just in case, but they weren’t needed as a unique boutique hotel across the river in Florence offered the quirky story and funky rooms we love. From the first step atop dark wooden floors to the snap and crackle sounds of vinyl spinning on a turntable, the GunRunner Hotel lured us right to the long wooden bar, inlaid with honeycomb onyx, which doubled as a check-in desk. Brick walls, exposed beams, and imaginative furnishings made the former Cadillac dealership building a warm, welcoming stop for the night. 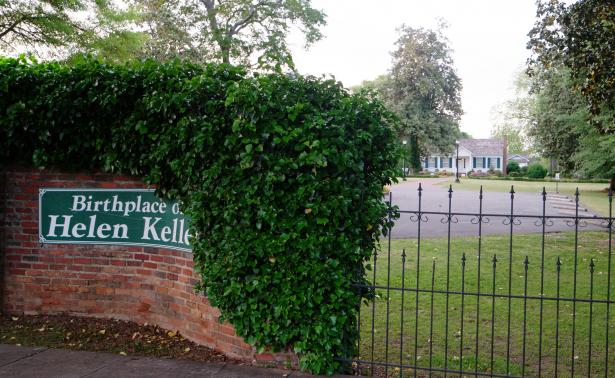 The Shakes and Rolls, Day 1: