Skip to main content
Virtual Reality Moves Towards the Mainstream

Virtual Reality Moves Towards the Mainstream

Is it virtual reality’s “big moment?” Is VR finally moving from early adopters towards mainstream consumer use? In early November 2015, the New York Times launched a major virtual reality storytelling initiative in partnership with Google – including mailing 1.3 million Google Cardboard headsets to its subscribers in the US. 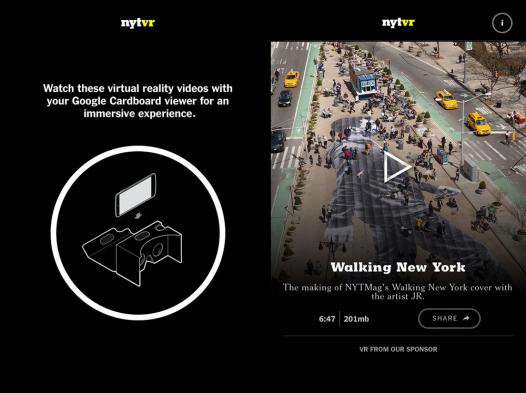 This signals a potentially important moment in the evolution of VR. In conjunction with the increasing availability of VR headsets – from suppliers such as Oculus and Samsung as well as the low-cost, “open source” Google Cardboard headset (which cost a few dollars each), the costs for the development of VR content has also been dramatically falling. With the launch of new cameras such as the Go Pro 360Heros VR Rig and related software solutions, the costs for developing VR content has declined from six figures to low five figures and heading towards the thousands of dollars as an entry point.

Miles highlighted a range of VR solutions in the Global All-Stars event and related Innovators Lab at this year’s DMAI Annual Conference. One of the speakers, Maya Lange (VP of Global Marketing for Destination British Columbia), demoed an impressive Wild Within VR Experience developed in late 2014/early 2015 – with budget of more than $600,000 Canadian dollars. Maya conceded that if they were undertaking the project in late 2015, the costs could be just a fraction of this investment.

Sharply dropping costs and the widespread availability of VR headsets is now moving VR firmly from the bleeding edge to a leading-edge technology that tourism marketers should keep a close eye on.

Like new technologies before it – from film to TV to the Internet – will it create new ways to tell the stories of travel? Rather than replace the desire to travel (which was an unfounded fear of these earlier technologies), will it instead excite consumers to experience a destination in person? Many technology observers believe it is already changing behavior.

Marcus Wohlsen, an editor at Wired, has described VR as finally starting to create a “new set of expectations of what it should mean to interact with a computer.” Wohlsen notes, “Especially as a medium for non-fiction, I believe the hype that VR can act as a powerful empathy engine, a uniquely direct way to put us in someone else’s world.” (Read his full opinion piece here.) This obviously speaks directly to the potential for tourism applications, both to travelers and perhaps initially to trade and meetings partners.

Of course we have been here before. Stereographic photography was a popular new technology in the 19th century and various VR experiences have been developed and touted since the 1960s. What makes it different this time is the ubiquitous availability of powerful computers, with high-definition screens in everyone’s pockets. The smartphone revolution has immediately made the distribution and availability of VR experiences a potential mainstream experience.

Development of VR experiences for the trade or key consumer events has been the focus of tourism marketers to date. Even in this context there should be a clear way to measure the impact and influence of the investment – such as a survey of trade partners on their reaction to the VR experience, and the monitoring of bookings from consumers or agency staff who have interacted with the experience (and a comparison to a control group who did not).

For broader consumer use, tourism marketers should keep a close eye on the impact of the New York Times and other media who have invested in the space. For destinations or hoteliers with strong crossover amongst New York Times readers, there are already 1.3 million potential visitors or guests who have a VR headset available.

Indications of strong usage from the publishers of VR content, viral sharing of content or social media buzz are all possible indications that it is time to get more aggressive with your investment in VR.
Share This: