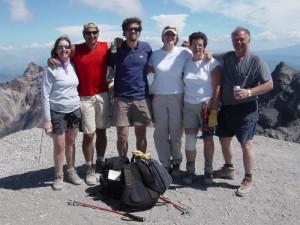 Mount St. Helens is a very conquerable peak – much more so since it exploded in 1980. The blast that sent soot around the globe also shaved more than 1,300 feet off one of Washington State's iconic Cascade Peaks. It's more of a long hike than a climb up the 8,363-foot mountain, and the view from the top is as stunning as the ones that reward climbers from the peak of much more prominent and taller neighbors Mount Hood and Mount Rainier.

Still, when I spoke to a group of tourism professionals around Mount St. Helens, no one in the audience of 50 or so had ever taken the ten-mile round-trip trek to the top and back. I was shocked: How can you promote this incredible place without taking in its finest vantage? I asked who would go to the top if we picked a date to summit. After lunch, 14 people signed up – many who had never hiked more than a mole hill, most who admitted they weren't ready for an hour on a Stairmaster, never mind seven to ten hours on the side of a volcano. 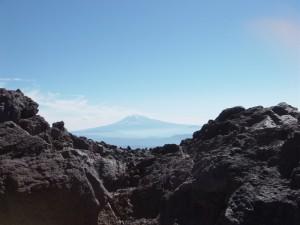 St. Helens is steep, with the trail up offering almost 5,000 feet of elevation gain on five miles of terrain that varies from roots and rocks to boulders to ash. But climbers don't need to wait until the summit to receive their reward: the views – five other volcanic peaks, the Columbia River, the Pacific Ocean, plus the devastation and rebirth since the explosion – can be seen much of the way.

I believe every person has his or her own Mount Everest. For some people, it's Mount Everest, for others, it might be Mount St. Helens, for many it might be the hill in the park across town. Bottom line, for a few this would be easy; for some, the highest mountain they would ever climb. “The 14” committed to getting ready for the St. Helens assent by walking with weighted backpacks, taking weekly hikes on other mountain trails or using that Mount St. Helens setting on the local gym's Precor 7.2 machine. 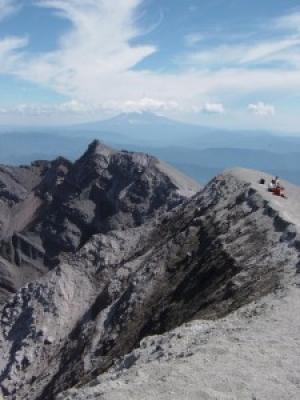 After a hearty breakfast at camp, a friend and I led the well-prepared hikers from the forested trailhead toward the top. Atop soft roots and soil, beneath a canopy of fir trees, we knew in the first 100 yards that it was a big win just to have 14 people commit to do something at a luncheon, then show up three months later ready to do it! Our role was really mostly camaraderie, but it evolved as we climbed. We packed band aids for blisters, extra water, extra protein . . . and used it all.

Way before the hikers arrived on the ledge of St. Helens to see the newly forming volcano in the massive crater below, I think we heard “I can't believe I've never done this before” 14 times. The hikers arrived at the summit at different times, in varying degrees of elation and exhaustion . . . but the reaction was always the same: awe, and more passion ahead for what they promote everyday. 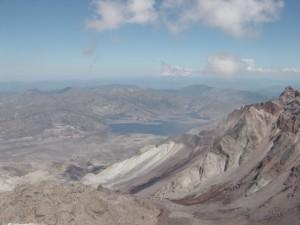 To me, the most obvious thing was that the hardest part wasn't the hike itself.

It was simply getting hard-working tourism folks to open their calendars, find a day, and write: FIELD TRIP. Weren't field trips the best part of school? Why don't we take them now? Sure, too busy. Too busy until you actually take one and realize . . . I need to do this more often.