Few things can create the same level of excitement these days as opening a box of new tech gear. Just like a child, you want to believe in a miracle, anticipating a technological wonder. Some deliver on that promise, others disappoint. I wondered what it will be like for me with a new Samsung Galaxy Gear (a.k.a. Smartwatch). 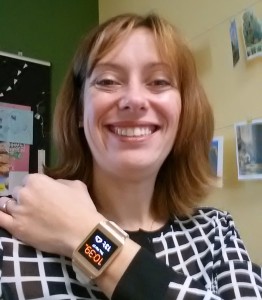 Don’t get me wrong, I did my homework: comparison shopping, reading dozens of product reviews and trying out both the Pebble Smartwatch and Sony Smartwatch on my wrist. The first looked too juvenile; the second disappointed with a pixelated screen resolution.

Samsung was an easy choice with its nice set of features and an appealing design that felt futuristic yet classy. (An interesting nugget to share: The model with the gold finish and oatmeal color band – clearly a version for a girl – was the only one left in stock at Best Buy when I went to make my final purchase. I guess the first adopters were overwhelmingly guys.)

Right from the start I noticed a couple of pleasant and not-so-pleasant surprises. Syncing with my Samsung Galaxy S III phone was a breeze, and adjusting the diameter of the band was easy and elegantly executed, too.

The concept of needing a charging cradle dock that literally wraps around the body of the watch to be able to charge it was a disappointment. I already have plenty of wires and docks around me and was in need of no more. The low battery life (about two days on one charge) wasn’t something I welcomed, either.

That said, the idea of a “smart” watch felt very comfortable and natural from the get go. With so many smart electronics around us, having a watch that does more than tell the time was, in a way, a no-brainer. I love that I’m able to get notifications about new text messages and emails, and can read them right on the watch’s screen.

Being able to take pictures with a camera built into the band, while gimmicky, is a fun feature to have. The photos inevitably all have a strange angle, but now I know what my life is like from the point of view of my wrist.

All things considered, Samsung’s Gear watch has lots of potential, but also needs lots of work.

Finally, being able to pick up a call and actually talk into my watch, while a mix of embarrassment and amazement when done in public, proved to be an extremely handy feature when you can’t locate a phone quickly enough during an in-coming call.

The navigation or user experience of the watch is rather intuitive and largely consists of taps and vertical and horizontal swipes. The voice control feels clunky and has a response delay – the need to keep repeating myself over and over again into my watch makes me feel silly instead of James Bond cool, so I limit my use of voice controls while wishing for Siri to be part of the experience.

After getting the watch, one of the first things I did was to check for available apps to download. The selection was truly underwhelming with just a few choices in each category: stopwatch, timer, pedometer, radio, Evernote. Why oh why didn’t Samsung hire some developers to create a broader selection before launching the product?

It did take some time to grasp the idea that a smartwatch is merely an extension of my phone’s screen. The two devices continuously sync with each other so that the Smartwatch is able to display content that is stored on the phone, such as call logs, text messages and my contact list.

Once you are out of Bluetooth connection range from your phone, the watch immediately loses three-quarters of its brain power. But the biggest surprise of all is that, while clearly secondary to the phone in features and functionalities, I feel much more personally connected to the watch. The fact that it is attached to a part of my body completely changed my attitude towards the product.

Yes, having an Evernote app available on the watch is nice, but I don’t want the watch to increase my productivity – I want the watch to help me be more healthy, active and happy. None of these features were truly well explored and enabled by the Samsung Galaxy Gear.

All things considered, Samsung’s Gear watch has lots of potential, but also needs lots of work. It’s certainly the beginning of the trend, but not the product that will define this new market category. You have to give props to Samsung for the company’s desire to experiment and be one of the first on the market, but they do need to take a hard look at the core value of the product. That said, I can’t imagine ever going back to the plain old watch that only tells time. So, for now, Samsung Galaxy Gear will stay on my wrist until a true game changer arrives.

Vice President/Creative Director Elena Prostova is responsible for evolving the products and services Miles provides to clients from both a creative and a technological perspective. She keeps an eye on developing trends, from mobile technologies to digital publishing, to bring the best of our thinking to our clients, ensuring continuous innovation.