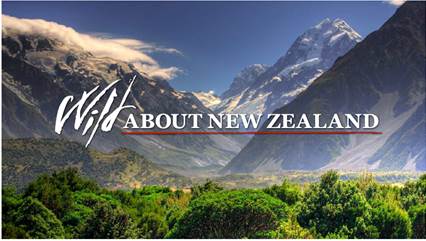 Watch the Television Promo of Wild About New Zealand.

This major television series celebrates the 125th anniversary of New Zealand's National Parks, the second oldest National Park network in the world after the USA. Miles retained the online rights to all the footage from the project - hundreds of hours of high-quality HD footage of some of the most remarkable National Parks on the planet (several have World Heritage Status). Miles is also putting together a targeted tourism marketing program, first aimed at the domestic market, and then international, to promote National Parks to visitors.

Customizing the footage into online videos such as the samples below will be a key part of this marketing program:

In this way, Wild About New Zealand is one of the first projects of its type in the world, integrating a major "traditional" television production to online content and tourism marketing opportunities right from its inception. In the domestic phase of the program, Miles is working with the Department of Conservation, TVNZ and major book publisher Random House (who publishes the book of the TV series in October) to leverage the TV series, the book and related PR.

A simple Wild About New Zealand visitor information website has been launched, which will feature a deals program of activity and adventure operators in or around National Parks plus the sponsored content customized for partners. A Facebook contest with partners is also planned for launch with the deals program in late September.

Finally, to ensure visitors' experiences in National Parks are fun and safe, a series of outdoor safety videos have also been produced by Miles around the TV series. This series of four videos were produced by Joanna Paul, Miles' online video producer in the South Pacific, and sponsored by international outdoor equipment brand Macpac.