While not a requirement, using the cards and end screens functionality in YouTube can help drive viewer behavior, whether your goal is to increase subscribers or point viewers towards certain content (or both!), these tools can help.

The cards feature has many ways in which it can be applied to drive user behavior. A few examples:

The card will appear in the top-right corner and provide a preview of the card’s message to your viewers. If the viewer clicks, the card associated with the video appears alongside the video you’re already playing. So, users aren’t being directed away from viewing your video, instead the content is supplementing what they’re watching. 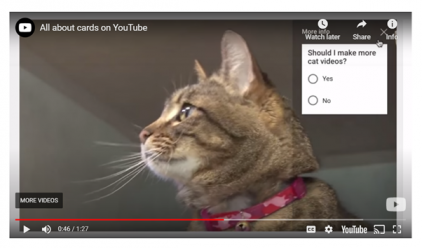 In the example above, the creator has created a card with a poll to engage his viewers on the kind of content they want to see more of.

You control when the card displays, it’s best to time this so that the card pops-up when a scripted call-to-action appears within your video (for instance, your video names a specific hotel, a card then displays for that hotel’s landing page). Cards can also be an effective way to revamp older content by pointing viewers to more recent, relevant videos on your channel.

Pro Tip: Take a look at the average watch time of your video and place cards within that time frame to encourage further engagement and subscribers.

The end screen feature allows you to promote up to four elements within the last 5-20 seconds of your video.  You can use end screens to:

When using an end screen it’s best to plan for this within your final video by leaving a bit of space at the end for the end card to “sit.” This can also coincide with a specific call-to-action at the end of your video, either verbal or visual. Please also note that you can’t use an end screen and a card at the same time. 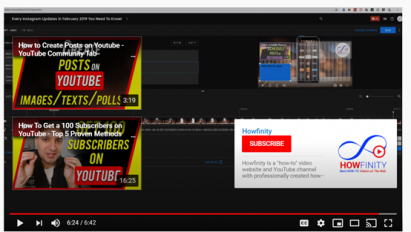 In the above example, the creator has chosen to use the end screen function to display two relevant videos from his channel to keep viewers watching his content in addition to a call-to-action to subscribe to his channel.

As with any optimizations to your YouTube content, don’t feel as if you have to apply this across all of your content at once. Try these tools out on a few videos and see what happens!  Sometimes small adjustments can produce huge results, assess your individual goals for your channel and your content to see if these tools are the right fit to help you achieve.

Emilie DeLong is a Portland, Maine, native with a father from Georgia and mother from Quebec City. With families living in completely different countries, travel has always been a huge part of her life. She started her career at Miles as a member of the Open Florida traveling video crew, and now manages print and video production for Miles. When she’s not reviewing b-roll or calculating tonnage requirements, she enjoys distance running (Ragnar, anyone?), photography, cooking and, of course, travel!